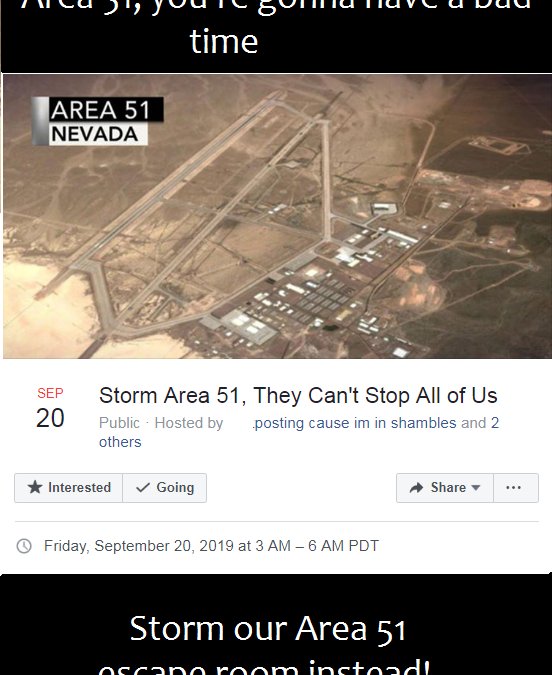 ‘Should everything go according to plan, more than a half-million strangers will gather in a remote Nevada town in mid-September, united by a common goal: to raid Area 51 in the wee hours of the morning — using a strength-in-numbers approach to reveal any extraterrestrial treasures stashed within the base.

More than 540,000 people from around the world had signed up to attend the joke Facebook event: “Storm Area 51, They Can’t Stop All of Us” — and just as many had indicated they were “interested.” Planned for Sept. 20 in Amargosa Valley, an hour’s drive from Las Vegas, the event page is filled with thousands of satirical posts and memes theorizing the best way to break into the top-secret facility.

Speaking with The Washington Post on Friday, Air Force spokeswoman Laura McAndrews said officials were aware of the event. When asked how authorities would respond to ardent explorers who might attempt to enter Area 51 in September, McAndrews said she could not elaborate on specific plans or security procedures at the base. She did, however, issue a warning to those itching to try their luck.  She stated that, “Area 51 is an open training range for the U.S. Air Force, and we would discourage anyone from trying to come into the area where we train American armed forces,” McAndrews said. “The U.S. Air Force always stands ready to protect America and its assets.”‘

So rather than putting yourself in danger from storming an active U.S.  Air Force open training range, come and storm Red Lock Escape Rooms “Area 51 escape room” instead.

We guarantee a fun time, and you can even get a photo of you doing a “Naruto run” pose by one of our Games Masters!